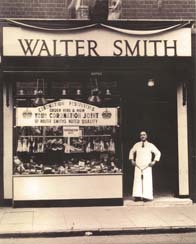 The first Smith we know about as a butcher was John Smith, who started a meat business in his home village of Manea, Cambridgeshire around 1850. The village was the centre of a small farming community. His son George Arthur (known as G A) Smith, born 18th July 1862 would have worked with his father and learned his trade as a traditional butcher – i.e. slaughtering, retailing and probably some manufacturing.

In the agricultural depression of the 1870’s G A Smith left home and made a long journey to Birmingham at the age of 17. G A Smith worked hard, married on 9th February 1885 aged 22 and in that year purchased the lease of a small butchers business at 88 Hospital Street.

Walter Smith was G A Smiths son, and he took over the family business in 1914 at the outbreak of the first world war.

Now there are Walter Smith shops across the Midlands many of which have achieved
Q Guild status with more to follow.  The Walter Smith name is known across the entire country for its award winning products and innovative home made recipes made from the best quality locally sourced meat.

Registered in England and Wales:

This website uses cookies to improve your experience while you navigate through the website. Out of these cookies, the cookies that are categorized as necessary are stored on your browser as they are essential for the working of basic functionalities of the website. We also use third-party cookies that help us analyze and understand how you use this website. These cookies will be stored in your browser only with your consent. You also have the option to opt-out of these cookies. But opting out of some of these cookies may have an effect on your browsing experience.
Necessary Always Enabled
Necessary cookies are absolutely essential for the website to function properly. This category only includes cookies that ensures basic functionalities and security features of the website. These cookies do not store any personal information.
Non-necessary
Any cookies that may not be particularly necessary for the website to function and is used specifically to collect user personal data via analytics, ads, other embedded contents are termed as non-necessary cookies. It is mandatory to procure user consent prior to running these cookies on your website.
SAVE & ACCEPT